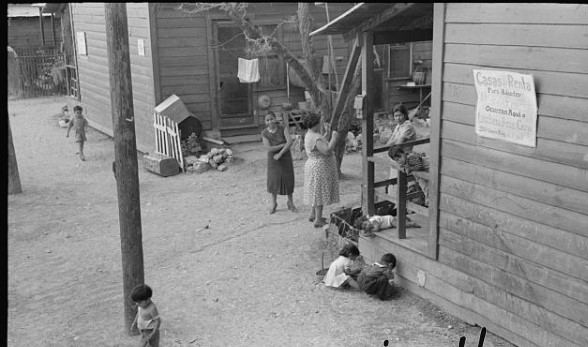 In pre 1950 or before the freeway what we call the Interstate now, people would be asked where do you live? And they would answer Los Courts or el barrio de las avejas. At that time people. Especially those living in the predominant west side would list their neighborhood or “el barrio” as their residential area.

As I can recall, I lived with my grandmother Reynosa’s family on Vera Cruz St close to the Wesley Community Center. So it was called el barrio del Wesley. Everybody who lived there knew everybody’ business because we were living right next to each other. The walls were thin so you could hear their conversation or fights. During those times, the streets were not paved. The alleyway had a set of ‘houses” on the left and another set on the right. They were all connected to each other sort of a continuous duplex with a small front porch.

Most of the families living in the barrios were family members who emigrated from Mexico with very little money. The landlords built those shanty’s to accommodate the increasing number of immigrants. In my family’s case, when I started to live with my mother, (that’s another story) we lived in el barrio de las avejas or Don Chencho. It was called that because the houses look like bee hives which were all in line. Almost all of my father’s family lived next to each other except for Uncle Mayo and his wife who lived In El Modelo, another barrio. El Modelo was what the name indicated. It was a model of what the barrios were supposed to be. An alley which was paved with concrete and space for parking your car if you had one.

Most of the time the people, who rented the places, made their houses looked nice and clean. They even planted flowers in front and back. Even if we had a front yard which was all dirt, my mother had us sweep the dirt and rake the dirt with lines so it would look nice. My grandmother Romana also raised chickens. There weren’t that many dogs because that was just one more to feed. However, my grandmother always sent me to the feed store to buy chicken feed and corn. The corn was for the rooster to breed more chickens. Some people planted their own food where they could.

In most barrios the people had to share the water. They would go to where the spigots was to take water home in a porcelain bucket for drinking and there was always a community washing clothes area where women would gather at different times to wash their clothes. Also, there were shower and community toilets with the people having a key to a particular toilet which they had to share with the rest of the community.

People who lived in the in the Wesley area were warned early that they had to move from their house because the owners were being forced to vacate due to the freeway being built. Way before the freeway, my grandfather bought a house on Fiesta Alley off Vera Cruz St.  which was in another barrio. The difference was everybody own their own home.

Depending which barrio people lived would depend if they had access to the essentials of living. For example; if you lived in the courts, you had running water, and bedrooms for everybody. Each room had electricity for lights. In comparison, in other barrio there was no electricity. You had to have lights from kerosene lamps where you could get kerosene from the Mom and Pop store near you. Heat was from the potbellied stove where you would get the burning coal in a pan and place it in the middle of the room. When electricity did come, it was a one line cord which went to each house for one light bulb. No plugs. No air condition in the summer. At night everybody would sleep on the floor nearest the door to get the evening breeze or they slept outside on the porch if they had one. My grandmother made us all sleep outside in the backyard on an old bed with no mattress. If it rained, we covered up with a tarp until it stopped.

Our entertainment was the television at night and games during the day. Sports were played in the street with a makeshift ball. Basketball was played on a wooden backboard with a barrel ring as a hoop. After school most of the kids played in front or backyard. At night, if someone had a television, we would sit outside and the neighbor would turn the TV out toward the window so we could see the shows.

Regardless if you were renting or owning your own home, people were living in a barrio or a neighborhood which helped each other sort of like a neighborhood watch. When children left home there was always someone looking out after them. If they misbehave, their parents would know about it before they got home. Birthday parties were celebrated with the neighbors being invited and all the families would participate in Christmas Posadas. Traditions would be passed on to the younger generation and when they had their own homes they would celebrate just like they did when they lived in the barrio.