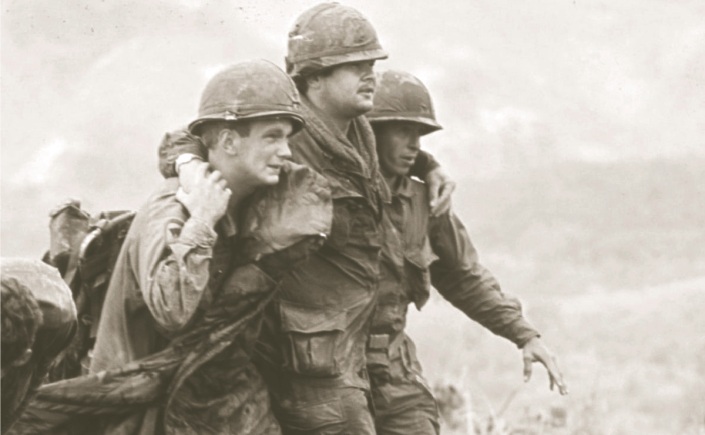 It’s been close to 50 years since I deployed to the Republic of Vietnam. I knew that I was going into an Infantry unit because I was going as an 11 Bravo. Before deploying, I was a Drill Sergeant at Ft. Lewis, Washington preparing young soldiers for combat duty. I was in the best of shape even though I was in my 30s.

My previous training had prepared me for this type of conflict. Unfortunately, my last two deployments have been in cavalry units not infantry units. I had experienced training in jungle warfare, guerrilla warfare, desert training and Ranger training. In the cavalry, we were used as Mechanized Infantry, quite different from being a ground pounder. However, I did see combat duty in South Korea in the DMZ as a squad leader in a rifle unit.

When I arrived in Bien Hoa airport, we were greeted by a rocket attack and we had to hurry to our bunkers. Soon after, we were given a place to stay while our orders were being cut.

The next day we were placed in a C130 and flown to AnKhe, where the 4th Infantry Division was positioned. (My previous second assignment had been to Ft. Lewis with the 4th Infantry Division in 1963, before that I was a ground pounder with 10th Infantry and 20th Infantry in Panama) I was elated to be back with the division. No sooner had we arrived for a briefing and while  we were being briefed by the Division Intelligence, we got hit with a mortar attack. My mind went, too soon, and I went under a bench. They guys that went out of the building got hit. It ended quick.

After a health screening and paperwork done at the Replacement Company. I was waiting to see what unit I was going to be assigned to. I was an E-7 Sergeant First Class and I would be working as a platoon Sergeant in an Infantry Company. Somehow, some screwball in personnel looked in my file that I had journalism experience and placed me as Noncommissioned Officer in Charge (NCOIC) of the Division Public Affairs Office. Apparently they needed an E-7 in that position and I was handy. Maybe my age held me back. I don’t know.

I didn’t mind the duty because I had some top notch reporters in the office whom I had to assign to field units to get stories. Sometimes I had to deal with correspondents from the TV networks. I spent a month and a half with them. It so happened that our new unit commander fresh from the states ordered us to turn in our weapons and ammunition because we were a rear echelon unit. So, we did. The VC found out about that and attacked the “rear echelon” and killed most of the finance unit which was in the forefront of the attack. I couldn’t do anything but watch the slaughter from my vantage point. After that, I put in for a transfer to an infantry unit.

The division commander read my letter and why I wanted out. He didn’t like what I wrote and he transferred me to the Replacement company to await orders. I stayed there waiting for my orders. Meanwhile, I was asked to assist in the training of the newbies. So, that’s what I did. Taught them ranger techniques, ambush and combat patrols so they could be well prepared before they went out in the field with their unit.

We were getting close to December when we found that the Division was being recalled stateside. We left for Quihnon Air Base to await order for my new assignment. Meanwhile, Viet Cong decided to attack the base right where I was staying in my hooch. We fought back.  There were other incidents where a sniper tried to pick me off. He was fortunate that I couldn’t shoot back because the place where he was firing was in  a no fire zone. I waited till night fall so I could get back to the base.

Later I got my orders to go to the 101st Air Mobile. OK, I got training for airmobile operations at Ft. Riley, Kansas right before I left for Vietnam so, I’m prepared. So where did they put me? Picking up downed helicopters with the forward fire support element. I lasted a month.

Finally, someone at personnel had the right orders for me. They sent me to the 51st Infantry Battalion at Camrahn Bay. Anything Infantry was okay with me. Or so, I thought. It turns out that the infantry unit was under a transportation unit and was required to support all transportation vehicles running up and down the highway between Danang and a southern port. I had a platoon of 40 men and that was it.

We were on duty day and night guarding the bridge that kept us apart from the mainland. There was a river between us and we were constantly watching for sabotagers. We patrol the dunes outside the bay and set up ambushes there for VC who penetrates the perimeter. Our unit was close to the ocean that we could see freighters waiting to unload their shipment. Sometimes we see mortar rounds coming in to hit the freighters.

Did we have casualties? Yes, we did. All of them when the VC would hit the trucks. We had men firing the 50 caliber guns and exposed themselves. They were the likely targets. I had some setbacks also when my men got involved with drugs.

After leaving Vietnam I went on to serve at Ft. Bliss, 8th Infantry Division in Germany and later at Ft. McNair in Washington, D.C. as public Affairs. It seems that the powers that be could not send me to infantry unit even if I wanted one. That’s one of the reasons I retired.

All through my retirement and now I have had the feeling that I should have gone on to be with my brothers in arms. I didn’t feel right to be where I was.  I dreaded the ones I lost and I should have been with them. It has stayed in my mind all this time and I have never shared this with anybody.

Recently I was reminded by a movie of a Marine escorting the body of a slain Marine. The escort had been in a combat and was also placed on desk duty at some times and he felt the same way I am feeling. He was telling a veteran how he really felt and the Korean veteran reminded him that he came home to his family just like he was.  He was alive to be a witness to those men sacrificing their lives for their country. We are witnesses to their lives.

So, I write this to remind me and others mem like me who survived the war in Vietnam and middle East wars that we have to acknowledge that we are witnesses to our brothers in arms.